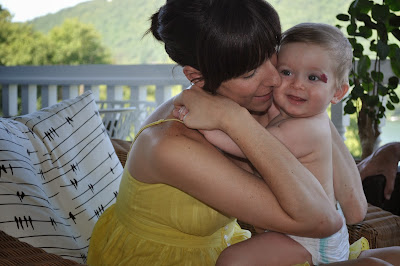 Lina has been experiencing many firsts lately. She's crawling, pulling herself up (kind of), and even sprouting teeny white teeth. Added to the list today: first play date. This is something I've long wanted to do, but had no one to do it with. A unique thing about having a child in the city, is that most New York mothers are in their thirties-forties. The trend in these parts (or at least the Upper East Side) is to establish your career in your twenties/early thirties, then follow that up with children in your mid to late thirties/early forties. As you all could probably guess, I did not follow this path. In fact, Mike and I never really followed any clear path when it came to family planning ("do you wanna not be careful tonight and see what happens?" Baby Roulette, as Mike called it). We never really planned on when we wanted or not wanted to have children, our life just sort of happened the way it did, veering on and off the ambiguous Baby course we had set together.

In all truth, we didn't really give it that much thought. The surreal idea of becoming parents was always approached with a giddy "we'll cross that bridge when we get to it" attitude, all the while secretly fantasizing about how wonderful it would be to actually be pregnant. Still, the odds of actually getting pregnant by accident seemed too removed and unrealistic to enter my realm of reasoning. After all, everyone I knew who had children had indeed tried faithfully for them. So you could imagine my shock (no, not shock. More like speechless disbelief) when Mike and I peered over the home pregnancy test only to find two little pink lines.

Almost a year and half later, we are utterly in love and fascinated with our daughter. She's funny and curious and beautiful and discovering everything in this world for the very first time. When my twenty-something friend of a friend (Leya) invited me to an Upper East Side play date hosted by a Mommy Club (Diva Mamas NYC), I immediately said yes. Mike and I are the only ones in our circle who have a baby, so Lina has never really had the opportunity to play and socialize with other babies her age. Initially, I was excited, but also a little apprehensive. What if these Diva Mamas were in fact, just that--thirty/forty something year old women who own penthouse apartments and have baby nurses and live-in nannies, and central air, and suit-wearing husbands? What on earth would I talk about with these self-titled Diva Mamas? Something told me my Baby Roulette joke wouldn't go over well with this crowd. My plan was to stick to Leya like glue.

But to my very pleasant surprise, these women were nothing like I had anticipated. On the contrary, they were warm and nice and inviting. A natural camaraderie immediately materialized between myself and these women. After all, we were all first-time mothers living in the city. And that, in itself, seemed to break the ice. The afternoon effortlessly rolled on with Lina happily squealing away with her new friend, Oliver. It was also really nice to share, vent, and laugh with other new moms about the joys, fears, questions and exhaustion that go hand-in-hand with Mommyhood. Overall, a good day.

Marianne Hayes Soviero
Welcome! I'm Marianne, a Tampa-based freelance writer. Thank you for letting me share my take on motherhood, everyday life, and growing up.